Ranor Silva is the Owner of the ABC Network. Most People known as Hiru TV and Hiru FM.

Currently she is Member of parliament for Kollonawa Division.

She is now married to Hiran Yattowita and he is modeler too. 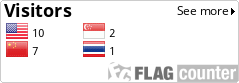